Posted by rocketsledd on July 10, 2013 in Cassandra, Comics, WIPs with 2 comments 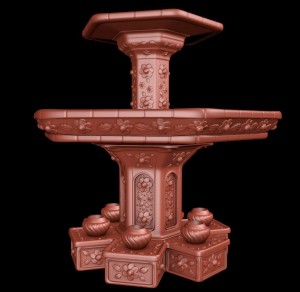 The end of the world may indeed be upon us. After many attempts—over many years—to learn Pixologic’s amazing application ZBrush, this staunch Polygon/Nurbs modeler has finally created a useful (and not-altogether-hideous) asset with it.

And if that weren’t enough, I actually succeeded in moving that asset into Cinema 4D where it looks almost exactly like the ZBrush version. Thanks GoZ!

Now I know, for many folks out there, this will be a “Yeah. So?” type of thing, but this represents a monumental success for me. I don’t know why, but ZBrush has always eluded me. Still does, largely, but I may have actually managed to sink my teeth in deeply enough this time to make some substantial progress in wrapping my head around this puppy. Like that ‘snake eating a puppy’ imagery?

Anyhoo, although the base mesh for the fountain was built in Cinema 4D, the custom flower and leaf brushes were built solely inside of ZBrush, as were the spirally containers at the base.

Many thanks to Digital-Tutors for their ZBrush training, which I have been devouring over the past month, and to Pixologic for ZBrush, especially 4R6. ZRemesher is superb and helped me get over one of the largest hurdles I’ve had over the years.

The model isn’t actually finished, but it’s close-enough to celebrate the victory. Pass the Bourbon!

Absolutely amazing! I’d have sworn it was a photograph of the object – except for the depth…
Congrats on bending ZBrush to your will!

It’s more like me finally learning how to bend to *its* will;)

Unless otherwise specified, this site and its contents ©1995-2013 John W. Sledd