Posted by rocketsledd on October 27, 2014 in Illustration, Portfolio with 2 comments

S omeone once said something to the effect of, “Art is never finished, only abandoned.” Who actually said it, and exactly what was said, appears to be a bit unclear, but the gist of the statement is a cosmic truth. And for me, personally, it has never been more cosmically truthier than it was with this piece, Glitch Witch.

I really just wanted to take a quick break from working on the Cassandra Project and do a personal piece that wasn’t butterfly-based. I’d intended for it to take about a week. That was a month ago and I’m truly tired of looking at it now.

The illustration completely took on a life of it’s own, and frankly, I’d still be working on it were it not for the fact that I wanted to submit it to a collection of Halloween themed pics on altpick.com.

The funny part is, it started life out as a piece that I began years ago but never finished. Well, none of that piece exists in this illustration now, so back in the pile of abandoned illos it goes. Oh well. Better luck next time.

Anyhoo, the image is my standard mix of 3D (built and rendered in Maxon’s Cinema 4D R15) and then tweaked and detailed in my new favorite painting app, CELSYS’s Manga Studio 5 EX sold here in the states by Smith-Micro. 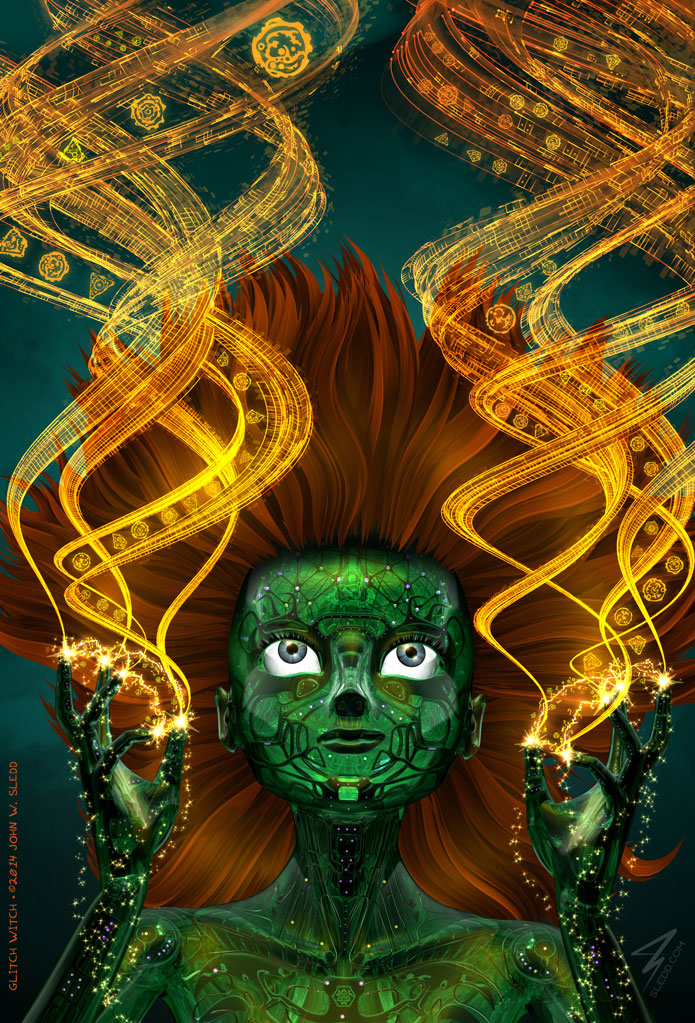 The Glitch Witch is incredible! Love the fingertip lightning and the (runes? tokens? coins?) in the spell-helix. Great work!

As for what the thingies are called, when I started creating them, I was calling them “sigils.” By the time I was naming each of them for brush building, they were being called “glyphs.” Also referred to them as “runes” on a few occasions. I’m very specific in my magical symbol thingy terminology.

Unless otherwise specified, this site and its contents ©1995-2013 John W. Sledd